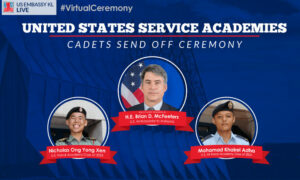 Both students were chosen after a rigorous selection process that evaluated their leadership potential, physical fitness, and academic achievements.

Nicholas Ong Yong Xen has been appointed to the U.S. Naval Academy (USNA) in Annapolis, Maryland. Nicholas attended SMK Puchong Utama (1) before joining the Royal Military College (RMC) in 2019.  At USNA, Nicholas will study cyber operations, and he is committed to becoming a navy officer with the Royal Malaysian Navy.

In his remarks, Ambassador McFeeters congratulated the cadets and expressed his appreciation to the Malaysian Armed Forces, Royal Military College, and the National Defense University for their unwavering support in ensuring the continued academic collaboration between the United States and Malaysia, strengthening our people-to-people ties, and forging close partnerships between our two countries.

Ambassador McFeeters said “the Malaysians who study at the U.S. service academies serve as ambassadors of Malaysia to the United States and make lifelong connections with U.S. service members and citizens.  These bonds continue to strengthen our relationships.  Cadets Nicholas and Khairel are joining the ranks of these impressive Malaysians today.”

Lieutenant Colonel Lemar Farhad, Chief of Office of Defense Cooperation at the U.S. Embassy in Kuala Lumpur, said “The U.S. Service Academy Program with Malaysia serves as one of our most significant initiatives in our military engagement with the Malaysian Armed Forces.  Graduates of these programs consistently move on to hold prominent positions within the Malaysian Armed Forces (MAF). We look forward to further deepening our ties in human capital development through increased training and education programs in years to come.”

To date, a total of 34 Malaysians have graduated from four U.S. service academies, the first cadet attended the U.S. Naval Academy Class of 1971.  Thirteen completed their program at USNA, four from the USAFA, twelve from West Point, and five graduated from the U.S. Coast Guard Academy.

Mohamad Khairel Adha bin Mohd Khairee hails from Taiping, a small town, up north in Perak. He is the 5th out of 6 siblings. He wants to study Aeronautical Engineering at USAFA and aspires to be a fighter pilot upon commissioning in the Royal Malaysia Air Force.

At age 13, he attended King Edward VII Secondary School and learned to adapt to new and challenging environments. Khairel is a student leader, rank holder and a musician. He speaks Japanese and has participated in student exchange program in Japan. Khairel is very active in sports especially field hockey and cricket. He is goal-oriented, establishes pathways to success, and leads people there.

Khairel completed Foundations in Management at the National Defense University Malaysia with total CGPA of 4.00. He is the first in his family to serve in the military.

His principle in life is to aim higher than his dream. He believes those who work hard and never give up in life are always rewarded with success in the end.

Nicholas Ong Yong Xen hails from Puchong, Selangor. Nicholas graduated as a valedictorian from the Royal Military College (RMC), inspiring and influencing his cohorts and academic teachers. He earned the “Director of Studies Award” from RMC for his excellent academic achievement. He wants to study Cyber Operations at USNA and aspires to be a seaman upon commissioning in the Royal Malaysian Navy.

A recipient of the Duke of Edinburgh’s International Award and Gold award in English speech competition, he has held many leadership roles including being a rank holder at RMC. He is active in sports and has won several championships in taekwondo and robotics.

Nicholas completed the Malaysia Certificate Examination-SPM (O-Level equivalent). He is the first in his family to serve in the military.