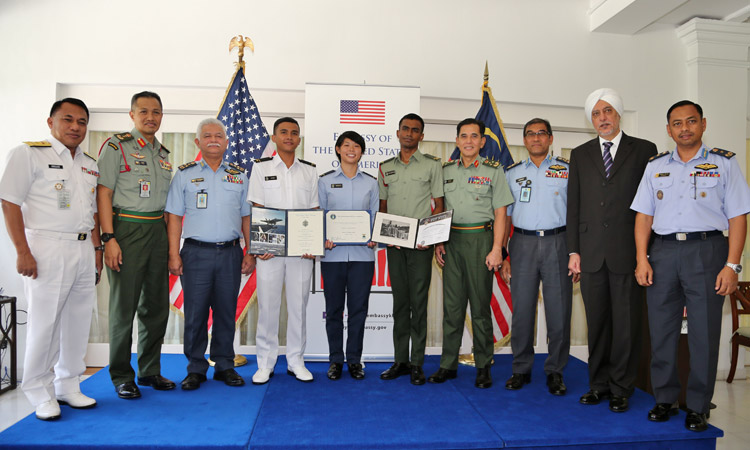 Grace Sian Ern Hui is from Ampang, Selangor. She wants to study Aeronautical Engineering at USAFA and aspires to be a Fighter Pilot upon commissioning in the Royal Malaysian Air Force. At age 13, she attended the MARA Junior Science College and learned to adapt to new and challenging environments.  Grace wants to serve her country and be a standard bearer for other female leaders to follow. Recipient of the Gold Award in Co-curriculum, she was in the school’s track and field team and represented district and state level in basketball and table tennis competition. She completed IGCSE (5As 1B) and achieved 9As in the Malaysian Certificate of Education (SPM) examination. Grace is goal-oriented, establishes pathways to success, and leads people there. Grace completed Foundations in Engineering and Technology at the National Defense University Malaysia with total CGPA of 3.83. She is the first in her family to serve in the military.

Mateshan Varma Subramaniam is from Ipoh, Perak. Innovative, composed, and well-rounded, Cadet Mateshan is a top graduate of Royal Military College and completed Foundation in Engineering and Technology at the National Defense University Malaysia with total CGPA of 3.79. He is a top scorer in the Malaysian Certificate of Education (SPM) examination and has held many leadership roles including Junior Under Officer while at Royal Military College. Mateshan is an innovative leader and recipient of the Duke of Edinburgh’s International Bronze and Silver Award. He is a state level track and field and cricket athlete.

Muhammad Aniq Hilman Bin Haslimi is from Wangsa Maju, Kuala Lumpur. He was inspired to become a pilot in the military since his childhood days when he watched military jets and helicopters fly over his grandpa’s house.  He aims to study aerospace engineering and aspires to become a pilot in the Royal Malaysian Navy upon commissioning. Aniq graduated as the valedictorian and earned the Student Leader Award and Golden Excellence Award for leadership in his high school class. A recipient of the Duke of Edinburgh’s International Award, he has held many leadership roles including being an active member of the Student Representative Council. He is active in sports and has won several championships in petangue (lawn ball), rugby and taekwondo. Aniq completed Foundations in Engineering and Technology at the National Defense University Malaysia with total CGPA of 3.91.