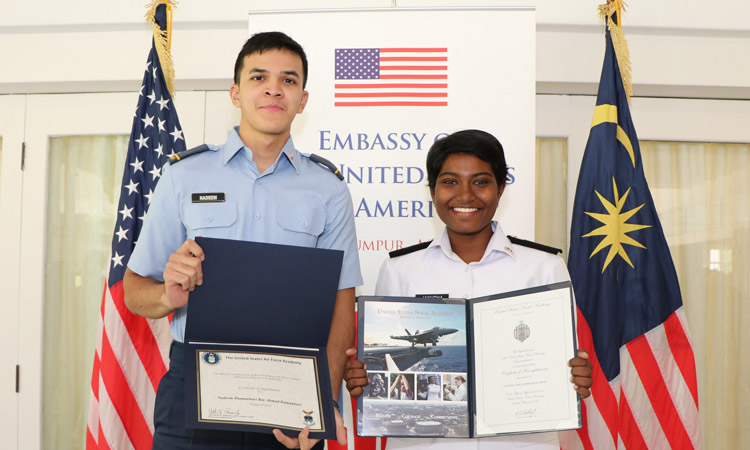 Putra Nadeem Damanhuri Bin Ahmad Damanhuri is from Petaling Jaya, Kuala Lumpur. He has travelled throughout Europe, Asia and North Africa and has been active in a variety of extracurricular activities, including debate, sailing, young scientist and volunteered in the “young teacher in math” program. Nadeem is a class topper and has excelled in the national exam all while managing leadership roles as part of Royal Military College program and in multiple extracurricular activities. Poised and confident, he desires to follow his father’s footsteps in serving his country. This bright and articulate candidate currently studying Astraunatical Engineering at USAFA and be a fighter pilot with the RMAF upon graduating.

Cadet Janushaa Bala Krishnan Muthiah hails from a Kuala Lipis, a small town in Pahang. She is a brilliant innovator and poised leader who wants to be a fighter pilot like her hero, Major Patricia Yapp, the first Asian female MiG-29 fighter pilot. She wants to study aerospace engineering at USNA in her pursuit of this dream. Janushaa was inspired to serve after hearing stories from her grandfather recounting the days he flew Nuri helicopters in northern Malaysia in the 1980s during the second counterinsurgency. As a result of her drive and preparations, she was admitted in the Malaysian National Defense University and has committed to 10-years of service in the Malaysian Armed Forces. Since 12, she has attended boarding school and learned how to adapt to new environments, teams, and challenges. A leader and scholar, she served as the team lead for a four-person project team who implemented an innovative way to convert palm tree waste into cement, an effort to make the key Malaysian industry more sustainable and environmentally friendly.