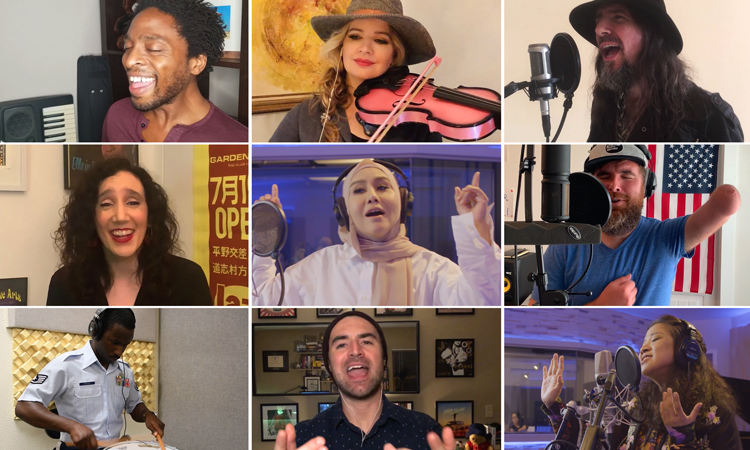 STANDING TOGETHER….IN THE EYES OF THE WORLD
American Cultural Envoys & Malaysian Stars Unite  through the Universal Language of Music

Kuala Lumpur – This year, the U.S. Embassy in Kuala Lumpur is celebrating U.S. Independence Day through a special cultural diplomacy collaboration featuring musicians from the U.S. and Malaysia.

The bilingual, English-Bahasa track was first recorded as the anthem commemorating Malaysia’s hosting of the 1998 Commonwealth Games. Featuring Ella, Malaysia’s Ratu Rock, the song was composed by Dato’ Wah Idris, a graduate of Boston’s Berklee College of Music; award-winning songwriter Habsah Hassan; and American singer-songwriter David Gates, who was the front man for the chart-topping group Bread.

“While Americans and Malaysians can’t gather in person to celebrate our relationship this year, we can find other means to highlight our long history of partnership and cooperation,” said Kamala Shirin Lakhdhir, the U.S. Ambassador to Malaysia. “Today, more than ever, music is a universal language that transcends borders and brings people together, and in that spirit, the Embassy is proud to release a new recording of the Malaysian classic Standing in the Eyes of the World.”

The project also involves a percussionist from the U.S. Air Force’s Band of the Pacific.  Military bands have long been a mainstay of the Embassy’s July 4th celebrations and the Band of the Pacific played the Sarawak Rainforest Music Festival in 2018 and LIMA in 2019.

Both Malaysian singers share a strong affinity with the United States. Ella made history when she recorded 1994’s multi-platinum album Ella USA in Los Angeles. She has now recorded tracks with two Guns N Roses guitarists, having performed with Slash on the 1998 hit Bayangan.

Sarawak native Zee Avi was signed by Los Angeles-based Brushfire Records and with the 2011 release of Ghostbird, she became the first Malaysian singer to have albums on the US Billboard Hot 200 Albums chart and top Billboard chart.

The Embassy worked closely with award-winning Malaysian songwriter/producer Helen Yap, a Berklee alumna who produced and arranged the song and coordinated singers across two countries and four time zones.  Nick Lee – also a Berklee graduate – not only mixed and mastered the song, he also designed Calvary studios, where the Malaysian portions of the song were recorded.

“When I studied in the U.S., I met a lot of students from all over the world and music was our universal language.  Our shared love of music brought us together,” said Helen.  “It was so rewarding to work with the U.S. Embassy and continue to build bridges and overcome borders by arranging this classic track and collaborating with so many talented artists.”

Since 2011, the Bureau of Cultural Affairs’ (ECA) Cultural Program Division has partnered with the Association of American Voices to send American music groups in genres such as urban/hip-hop, gospel, bluegrass, zydeco, soul, and jazz to more than 40 countries every year to conduct public concerts, present lectures and demonstrations, lead workshops, and collaborate and give interactive performances with local musicians.

Each AMA tour lasts two to three weeks, and involves one to three countries.  Selected through a nationwide competition, AMA bands have demonstrated high artistic ability, shown a strong commitment to education and engagement activities, and reflect the diversity of America and American music.