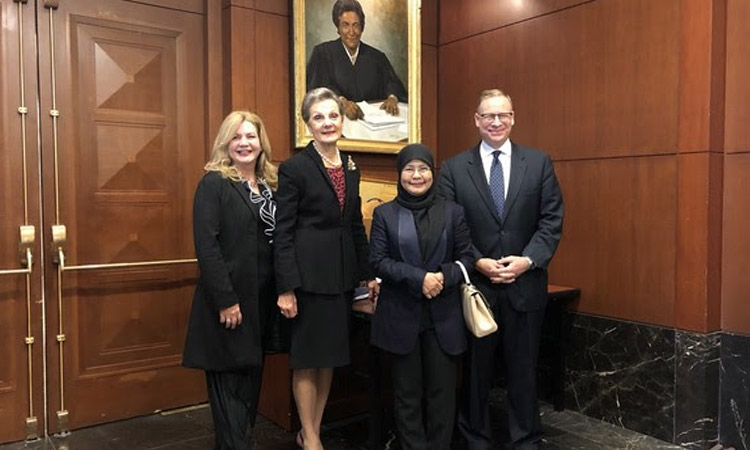 WASHINGTON – On December 13, the Chief Justice of Malaysia, Tan Sri Tengku Maimun Binti Tuan Mat traveled to the United States on her first international engagement since her historic appointment last May as the first woman to hold the office of Chief Justice. The Chief Justice is joined by fellow Malaysian judges on the program, which is designed to strengthen bilateral judicial engagement and encourage the sharing of best practices. The visit is hosted by the U.S. Department of Justice’s Office of Overseas Prosecutorial Development Assistance and Training (OPDAT), U.S. Department of State and Judge Loretta A. Preska of the Southern District of New York.

While in New York, the delegation will meet with representatives of the U.S. Attorney’s Office for the Southern District of New York, the New York City Police Department and officials from the Permanent Mission of Malaysia to the United Nations.

At the U.S District Court for the Southern District of New York, the delegation will explore best practices supporting the Rule of Law, judicial independence, courtroom security and combating cybercrime.

From New York, the delegation will travel to Washington, D.C. to visit the Supreme Court of the United States as well as meet with the OPDAT Director Faye Ehrenstamm and officials from the Administrative Office of the U.S. Courts.

“We are honored to co-host the first international visit of Chief Justice Maimun since her historic appointment as the first female Chief Justice of Malaysia,” said OPDAT Director Ehrenstamm. “Her visit marks an important milestone in the U.S. Government and Malaysian justice sector relationship.”

“Let me express my deep appreciation to the U.S. Department of Justice, OPDAT, the U.S. State Department, Judge Loretta A. Preska and the Southern District of New York, and the NYPD for the opportunity to visit America and exchange best practices,” said Chief Justice of Malaysia Maimun. “I look forward to a series of fruitful discussions on a number of topics of mutual interest and benefit to both Malaysia and the United States. I have no doubt it will be an enriching experience. I also look forward to continuing our cooperation as we work together to strengthen our bilateral relationship. I am pleased we can join together to promote the independence of the judiciary and the rule of law.”

On December 16, the U.S. District Court for the Southern District of New York will host a luncheon for Chief Justice Maimun with the women judges of New York federal and state courts. On December 17, the New York Bar Association will host a Continuing Legal Education (CLE) event at 5:30 p.m. in Room 850 of the Daniel Patrick Moynihan Courthouse in Manhattan. The CLE is open to members of the bar and the press. Topics will include the Malaysian Court framework, including the civil, criminal, tribal and Shariah sectors, as well as ethical obligations, the role of women in judicial leadership roles, the strengthening of judicial security, and best practices to combat cyber crime.