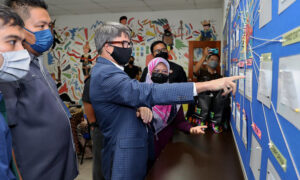 Ambassador McFeeters met officials from Sabah Parks, the Sabah Forestry Department, the Sabah Wildlife Department, climate change activists and other environmentally focused NGOs to learn more about work happening in Sabah on the climate crisis and environmental conservation.  In his meetings, Ambassador McFeeters reiterated the U.S. government’s commitment to tackling the climate crisis, combating wildlife trafficking in Malaysia, and working with partners to protect the rich marine resources and forests of Sabah.  For example, the U.S. Department of State’s Bureau of International Narcotics and Law Enforcement Affairs (INL) has provided a US$1 million grant for training on combating wildlife trafficking to the Sabah Wildlife Department, the Danau Girang Field Center and other local agencies.

Ambassador McFeeters also met with Sabah-based civil society organizations working on human rights issues such as the Sabah chapter of The Platform, a coalition of 75 civil society organizations (CSOs) in Malaysia.  They discussed a range of issues including environmental protection, voting rights, and the protection of vulnerable populations such as the stateless community and migrant workers.  Ambassador McFeeters also hosted a roundtable with CSOs working actively to address human trafficking and forced labor concerns in Sabah.  He highlighted the embassy’s ongoing programs to increase awareness and build the capacity of anti-trafficking organizations in Malaysia, including those in Sabah.

In addition, Ambassador McFeeters met with Datuk Seri Masidi Manjun, State Minister of Local Government and Housing, and discussed the state’s continued response to the COVID-19 pandemic.  He also met with the Kota Kinabalu Mayor Datuk Noorliza Awang Alip.  He expressed his appreciation for the city’s continuous support for the embassy’s outreach programs in Sabah, from the city’s relationship with Portland, Oregon, to musical concerts, and public awareness programs on waste management.  Ambassador McFeeters said he looks forward to expanding cooperation with the city, including on environmental and wildlife conservation and sustainable economic development.

Ambassador McFeeters also had a roundtable engagement with zoonotic disease experts in Sabah.  They discussed how the U.S. can support the work being done to combat the potential emergence of zoonotic diseases in Sabah and ways to strengthen global health security by preventing and preparing for future pandemics.  Public health remains a top priority for the U.S. government as the pandemic continues to evolve globally.

During his meeting with the Sabah Youth Council, Ambassador McFeeters learned about their work and the issues young people in Sabah face.  He also met with Sabahan alumni of the U.S. government’s exchange programs.  These alumni represent talented individuals and thought leaders from sectors such as security, education, civil society, environment, and the judiciary.  The meeting was an opportunity for Ambassador McFeeters to hear more about the alumni’s current activities with their local communities and their exchange program experiences.