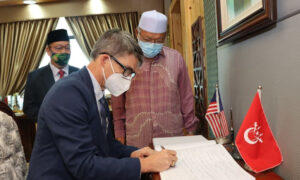 The Kelantan visit started with Ambassador McFeeters’ courtesy call on Menteri Besar YAB Dato’ Ahmad Yakob at his office at Kota Darul Naim. During the meeting, both leaders spoke about their hopes to continue strengthening the U.S.-Kelantan relationship. The U.S. Embassy has a long-standing relationship with Kelantan through educational programs and partnerships to develop entrepreneurial skills. Ambassador McFeeters also offered his condolences to those affected by the recent flooding in Kelantan. On December 30, the U.S. Embassy announced RM420,000 donation to the Malaysian Red Crescent Society to help with the flood relief efforts across the country.

In Tumpat, Ambassador McFeeters officially announced the opening of the Ambassadors Fund for Cultural Preservation award for the preservation of a traditional percussion instrument, the Rebana Kercing. The project is a collaboration between UMK and the U.S. Embassy to preserve the dying art of Rebana Kercing. It involves the documentation of the drum making process and performance, both of which are a vital components of the art. UMK Acting Vice Chancellor Prof. Dr. Nik Maheran Nik Muhammad said, “The international recognition and support received proves the strength of U.S.-Malaysia relations in various fields, including intangible heritage conservation efforts around the world.”

The Rebana Kercing project marks the 20th anniversary of the Ambassadors Funds for Cultural Preservation. The fund was first launched in April 2001. In his remarks, Ambassador McFeeters said, “This people-to-people collaboration in the field of preservation is a testament to the enduring relationship between the United States and Malaysia. And, how appropriate, as this year marks the 65th anniversary of our diplomatic relations and ongoing friendship. My hope is that the launch of this important project today will only be the first of many more exciting projects to come this year.”

Ambassador McFeeters had the opportunity to learn more about Kelantan during his meeting with five Malaysian alumni of U.S. Embassy exchange programs. The alumni spoke about their experiences in the U.S. and how their programs positively impacted their lives when they returned to Malaysia.

Ambassador McFeeters also visited the American Corner at the UMK Campus in Bachok where he engaged with young student leaders and shared his journey as a diplomat in a session called Chat with a Diplomat. The Ambassador toured the library and the American Corner Kelantan, which opened in 2018, and learned about the many services and facilities offered there. Upcoming programs at the American Corner will include exhibitions on the global fight to combat the spread of disease and environmental sustainability, and workshops and talks on women’s empowerment and media literacy.

Ambassador McFeeters also made time to explore some of Kelantan’s iconic landmarks in Kota Bharu. He visited Pasar Siti Khadijah and learned to ‘kecek Kelate’ (speak Kelantanese) with the mokcik (aunt) and kakok (sister) who have businesses at the market. Ambassador McFeeters also visited the majestic Rehal Park and the state mosque Masjid Muhammadi in downtown Kota Bharu.

Photos from the trip will be available here.