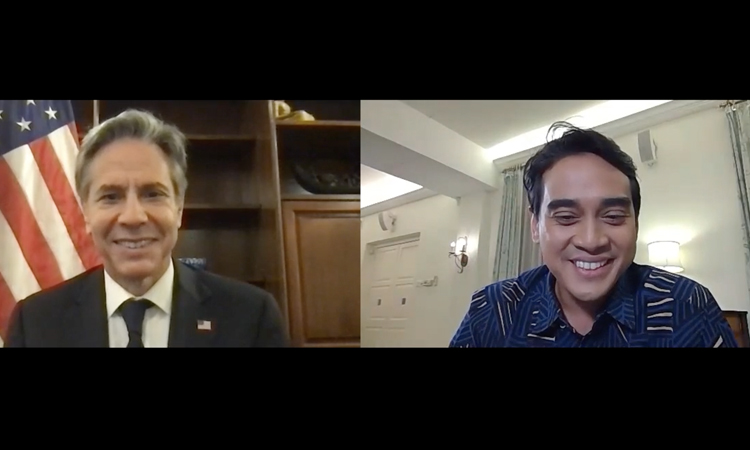 QUESTION:  Okay.  My first question definitely is about what benefit my fellow Malaysians and Malaysian business communities and the people of ASEAN – if you look into the bigger picture, the United States can’t afford to be absent from the region’s evolving economic potential, and – as you have pointed out clearly in your joint press conference this morning, and that the the U.S. will do more in delivering stability, growth, and also innovation.

So how does this new focus benefit my fellow Malaysians, Malaysian businesses, and also the people of ASEAN in general?

SECRETARY BLINKEN:  Well, we’re already building on a strong foundation.  The United States is already one of the leading investors in Malaysia in terms of our direct foreign investment.  And in fact, just in the last week, there have been very significant new investments, including from Microsoft and including from Intel.

But we are working to build a new economic framework for the entire Indo-Pacific region, of which we’re a part, and that I believe Malaysia will also benefit from that will facilitate trade, that will help us in particular take advantage of the digital economy that is affecting so many of our lives, that will involve more investment in infrastructure but in a way that really is a race to the top with infrastructure that is not in a way that protects the rights of workers and the environment, doesn’t create debt for countries that are receiving the investments, and also focuses on building infrastructure that is green as well.  Working on supply chains.

SECRETARY BLINKEN:  Malaysia is a critical component of very, very important supply chains, including on things like semiconductors.  And in all of these ways and more, I think we can deepen the economic relationship, the economic partnership that, again, already has a strong foundation.

QUESTION:  Great.  And we have seen the balancing act, quite a great balancing act in the sphere of diplomacy in this region.  It is indeed difficult yet practical decision needed in adjusting to new realities.  But above all, what matters most is the future of humanity.  We have, one, climate change, we have digital economy.  What are the area of priorities that demand a great synergy between the U.S., China, and Asian countries at large?

SECRETARY BLINKEN:  Well, first, let me say this:  Our engagement, our focus on the Indo-Pacific as a Pacific country ourselves is not about any other country.  It’s not about China, for example.  It is about our relationships and all of the tremendous potential that exists with virtually all of the countries in the Indo-Pacific.  This is a region that has the fastest-growing economies in the world; it has more than 50 percent of the world’s population.

SECRETARY BLINKEN:  It has a young, innovative, dynamic population.  It’s our future.  It’s our common future.  And I think we share many of the same beliefs about the desire for that future to be a free and open one.  But we also have huge common challenges, and I think the number one common challenge is, right now, COVID-19.  And it’s imperative that we do a few things on that.  First, that we defeat the current pandemic, and we’re making very significant progress, but of course we have a – now we have a new variant in Omicron that we have to deal with.

But the United States has made significant investments in vaccine production.  We were pleased to have been able to have provided a million vaccines here in Malaysia, but around the world we have donated – already donated more than 300 million vaccines.  Not sold – donated them; we’ve done it through COVAX so that that can be done equitably.  And by this time next year we will have donated around the world 1.2 billion vaccines, with no strings attached – not asking countries to do something in return.

But we also, even as we deal with the pandemic and increased vaccine production, and make sure that shots can get into arms – because that’s very important, too – we also have to build back together a stronger global health system so that we can ideally prevent but certainly deal more effectively with the next pandemic.  Because unfortunately, there’s likely to be one.  And I think that’s where all of our countries need to cooperate and work closely together.

I think that involves a few things.  For example, we should have vaccine production being done in more places in the world, including in Southeast Asia.  We need to strengthen the rules on global health so that there’s more transparency, more information sharing, more access for experts if something happens.  And we need to put in place the funds, the resources so that countries can protect themselves, to acquire what they need to protect themselves, and to prevent or see the next pandemic before things get out of hand.

So I think we have a responsibility to come together as countries, including China, including countries in this region, to do that: to defeat the current pandemic, and to make sure that we’re in a much better position to deal with the next one.

QUESTION:  Well, a lot of people are quite nervous in this region with regards to South China Sea.  And some of the questions that we have discussed, among the people of ASEAN:  Is there any alternative way that goes beyond military activities, military presence, in a sense, to create more stable region, especially in the area of South China Sea?

SECRETARY BLINKEN:  Yes, absolutely.  And it’s very simple.  It’s play by the rules, everyone.  We have clear international rules and understandings about freedom of navigation, about claims, maritime claims.  The Law of the Sea Convention is the most important of those.  The United States abides by it; other countries do, too.  And so I think if everyone does, including China, any differences can be resolved peacefully and, if necessary, through the courts.  There were very important decisions of the arbitration panel that comes from the Law of the Sea Convention.  Those decisions need to be respected.  And that’s the clearest, easiest way.

And it gets to the point that all of the countries of the Indo-Pacific have an interest in the rule of law and the rule of international law, and all of us abiding by it.  If we do, we’ll have peace, we’ll have stability, we’ll have the ability to – for commerce to flow freely.  And that’s going to be to the benefit of everyone.

MR PRICE:  Ashwad, we have time for one final question.

QUESTION:  All right, one final question.  In 60 seconds, sir, how do you imagine Southeast Asia in 2022?

SECRETARY BLINKEN:  My hope is that in 2022 we have three things that we’re moving forward – and it really goes to what we’re talking about, a free and open Indo-Pacific – at three levels: for individuals, the freedom to live in open societies, to have a voice in their countries, and in the policies of their countries; on a country-by-country basis, for countries to have the ability to choose their own path and to choose their own partners; and on a regional level, a region that is collaborating and cooperating, that those are the most important words, not coercion.

And I think if we continue to make progress on all three areas – the individual, the countries, and the region – then we will make real and give real meaning to a free and open Indo-Pacific region, which is what, as I’m hearing it, people in every country really want.

QUESTION:  Secretary Blinken, thank you very much for your time.

SECRETARY BLINKEN:  Thank you.  Great to be with you.