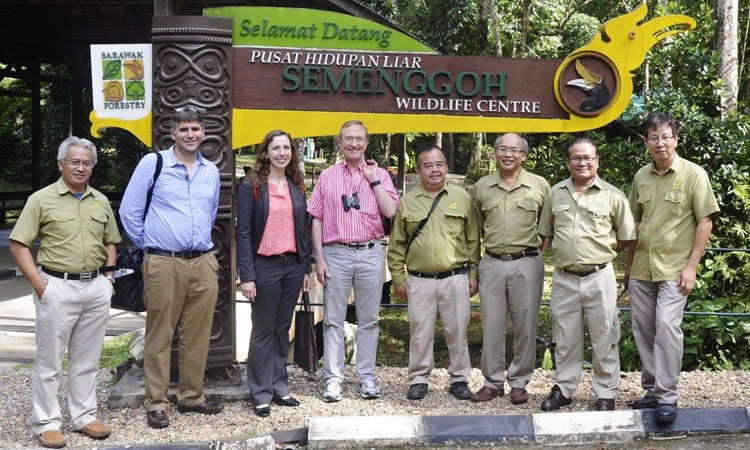 “A real jungle gym” is how U.S. Science Envoy Dr. Tom Lovejoy described watching orangutans from Sabah’s Orangutan Rescue Center exercising in the rainforest. The rescue, rehabilitation, and return to the wild of over 700 orangutans throughout the center’s history was just one of many biodiversity conservation success stories that Dr. Lovejoy heard during his four day tour through Malaysia from July 19  through July 22. At rainforest and jungle locations throughout Peninsular Malaysia and Northern Borneo, Dr. Lovejoy met civil society, student, and government leaders working to conserve and sustain Malaysia’s rich biodiversity. He was impressed with their passionate commitment ranging from an NGO attempting to stave off complete species extinction in the case of the Borneo Rhinoceros, to a wildlife center committed to rescuing orphan Pygmy Elephants, to a private individual who took on as his life’s work the sole personal responsibility for saving Borneo Sun Bears. Dr. Lovejoy surveyed a wide range of biodiversity conservation efforts in Malaysia aimed at protecting endangered flora and fauna species threatened by climate change, habitat loss, illegal wildlife trafficking, and forest fragmentation. Dr. Lovejoy stressed the importance of emphasizing biodiversity conservation success stories.

Dr. Lovejoy is a conservation biologist who coined the term biological diversity. He has worked in the Brazilian Amazon for 51 years on the longest running experiment on habitat fragmentation — similar to the one in Sabah. He says it is now very clear that fragments of forest lose species over time which weighs very heavily in support of corridors of habitat to connect otherwise isolated fragments.  His work as US Science Envoy to Malaysia will be to encourage an ongoing conservation agenda and to talk frequently about success stories to all those who are concerned with the future of life on Earth.