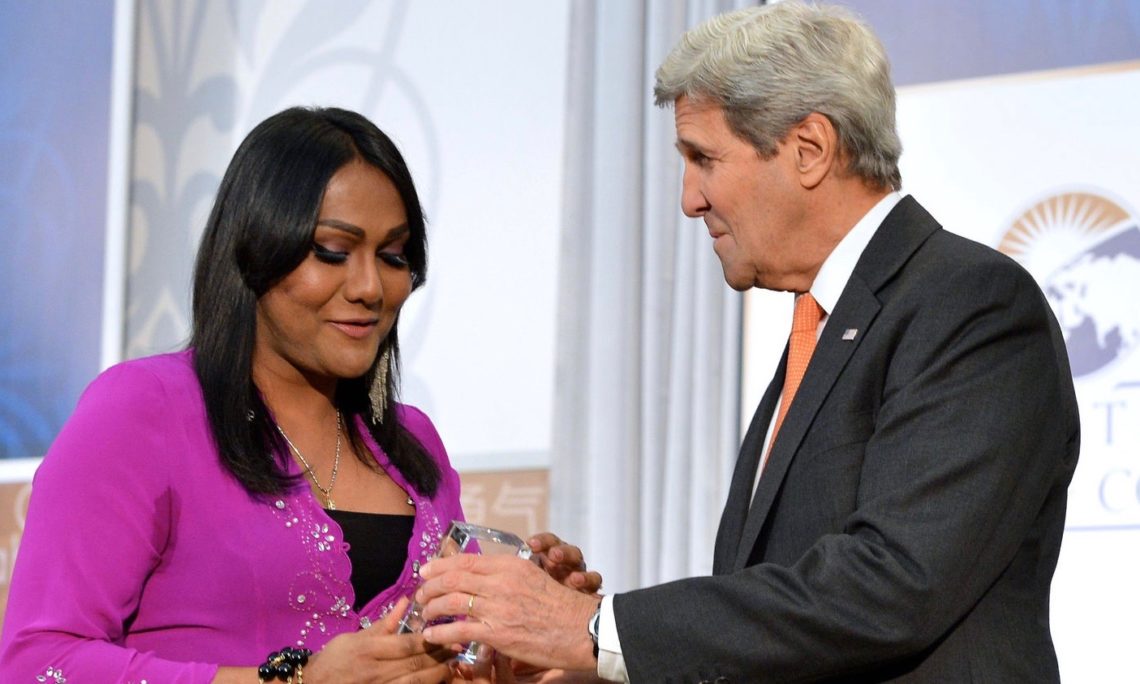 Nisha Ayub, from Malaysia, recently traveled to the United States to receive the U.S. Secretary of State’s International Women of Courage Award. This Award annually recognizes women from around the world who have demonstrated exceptional courage and leadership in advocating for peace, justice, human rights, gender equality, and women’s empowerment, often at great personal risk.

Nisha received her award in Washington, D.C. on March 29, 2016. Following the ceremony, Nisha will travel with the other honorees to cities across the United States to engage with the American people through an International Visitor Leadership Program. As a result of these meetings, the women build relationships with their U.S. counterparts and gain knowledge and skills to use back home.

This year marks the tenth anniversary of the Award, for which nearly 100 women have been recognized. The International Women of Courage Award ceremony was livestreamed at http://www.state.gov/s/gwi/programs/iwoc/2016/index.htm.

Nisha Ayub
Nisha Ayub is a leading advocate for transgender rights in Malaysia. She is a co-founder of two NGOs – the SEED Foundation, which provides support to transgender individuals and other marginalized communities, and Justice for Sisters, which provides legal aid to transgender individuals and seeks to end persecution of LGBTI people. Recently, she spearheaded a campaign to promote positive images of transgender people, and currently runs workshops on sexual orientation and hate crimes for government, corporate, and civil society groups. As a transgender, Muslim woman living in a Muslim-majority country, Ms. Ayub has been beaten and imprisoned simply for who she is. At age 21, she was arrested for dressing as a woman and served three months in a men’s prison, where she was sexually abused. Despite continuing threats, Ms. Ayub perseveres in fighting for the rights of LGBTI individuals throughout her country.