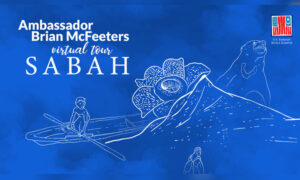 The Sabah visit started with Ambassador McFeeters’ courtesy call on the Chief Minister of Sabah, Datuk Seri Haji Panglima Haji Hajiji Noor.  During the meeting, both leaders discussed their desire to strengthen the U.S.-Sabah public health partnership.  COVID-19 remains the top priority for the United States, and the U.S. Embassy will continue to assist Malaysia to fight the pandemic.  In addition to the one million doses of Pfizer vaccines donated to Malaysia in July, the U.S. government provided RM3.5 million to boost COVID-19 testing capacity in Sabah and another RM2 million for ambulance donations and other support to the International Federation of the Red Cross and Red Crescent (IFRC) in Sabah and Sarawak last year.

The United States will continue to work together with partners in Sabah in promoting Sabah’s security and prosperity.  In his meeting with Chief Judge of Sabah and Sarawak Dato’ Abang Iskandar bin Abang Hashim, Ambassador McFeeters highlighted the U.S. commitment to security cooperation in Sabah and discussed shared priorities to combat terrorism, trafficking in persons, and wildlife trafficking.

Ambassador McFeeters also met with Kota Kinabalu Mayor Puan Noorliza Awang Alip to discuss the city’s response to the ongoing pandemic, in addition to expressing deep appreciation to DBKK for their continuous support for the Embassy’s outreach activities in the city, including America Days and other musical and cultural programming.

In meetings with officials from Sabah Parks, the Sabah Wildlife Department, and other environmentally focused NGOs, the Ambassador shared the U.S. government’s focus on the climate crisis and desire to support Malaysia in its efforts to overcome this challenge.   Through the Department of State’s Bureau of International Narcotics and Law Enforcement Affairs (INL), the U.S. Embassy has provided assistance to protect biodiversity that is vital for Sabah’s environmental health and tourism industry with a US$1 million grant to provide training on combating wildlife trafficking.

Ambassador McFeeters also met with Sabah-based civil society organizations working on human rights issues including SUHAKAM, Sabah Human Rights Center, and Advocates for Non-discrimination and Access to Knowledge.  They discussed a range of topics including ensuring freedom of expression, working together to combat trafficking in persons, and the importance of protecting the rights of stateless individuals in Sabah.  The U.S. Embassy recently launched a capacity building program to strengthen anti-trafficking organizations in Malaysia, including those in Sabah.

Other examples of the U.S. partnership in Sabah include:

Social media posts from the visit: