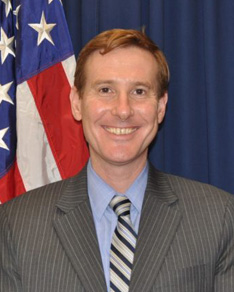 Michael Newbill assumed the position of Deputy Chief of Mission at the U.S. Embassy in Kuala Lumpur in July 2020. He is a career member of the Foreign Service.

Most recently, Mr. Newbill served as the Deputy Chief of Mission at the U.S. Embassy in Phnom Penh, Cambodia.  From 2015 to 2017, he served as Deputy Director for Mainland Southeast Asia in the bureau of East Asian and Pacific Affairs, covering Burma, Cambodia, Laos, Thailand, and Vietnam. Prior to this, Mr. Newbill was the Counselor for Economic and Political Affairs at U.S. Embassy Kampala, Uganda. From 2010 to 2012, Mr. Newbill served as Director, then Senior Director, for South Asian Affairs, on the National Security Council in the White House, handling all political, economic, and military issues for India and other South Asian countries. Mr. Newbill also served as the Political and Economic Affairs Chief in Mumbai, India (2007-2010), the Economic Officer on the India Desk (2005-2007), as an Economic Officer in the U.S. Embassy in Bangkok, with responsibility for multilateral and bilateral trade, intellectual property rights, biotechnology, and other economic issues (2003-2005), and Vice Consul in Manila, Philippines (2000-2002).

Prior to joining the Foreign Service, Mr. Newbill ran a project on Regional Security and Confidence-Building in South Asia for the Henry L. Stimson Center, a Washington-based research institution.