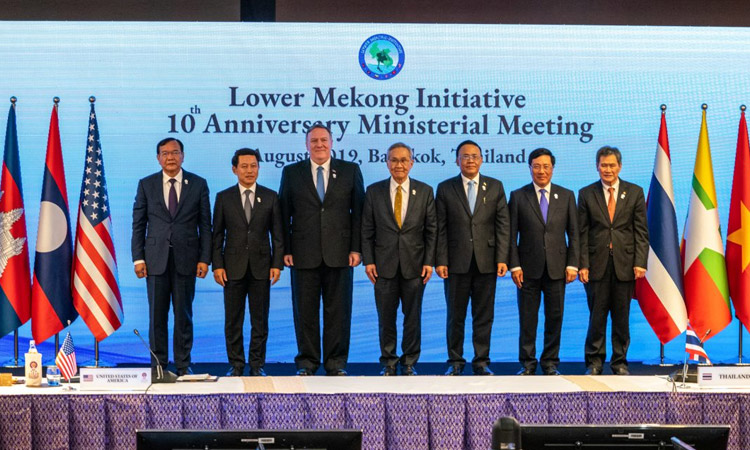 SECRETARY POMPEO:  Thank you, Foreign Minister.  I want to thank you, Thailand, for hosting this special ministerial marking a decade of the Lower Mekong Initiative.  The United States has been a proud partner for those whole 10 years, and thanks to our work:  340,000 people have access to improved drinking water; 3,800 officials, teachers, and students have been trained in technical English; 27,000 people have access to improved sanitation; and 70 technical teams have supported 45 projects to improve infrastructure sustainability.

These are real achievements, and they testify to America’s commitments to a partnership with the five Mekong countries.  We will continue to help protect your sovereignty and security, help you prosper economically, and safeguard your rich cultures and environment.

We share these goals with many of our friends and partners focused on the region, including our fellow Friends of the Lower Mekong, who just today issued a minister-level statement highlighting our shared approach and our principled approach.

But recently, I am sorry to report that we’ve seen some troubling trends.  We see a spree of upstream dam building which concentrates control over downstream flows.  The river has been at its lowest levels in a decade – a problem linked to China’s decision to shut off water upstream.  China also has plans to blast and dredge riverbeds.  China operates extra-territorial river patrols.  And we see a push to craft new Beijing-directed rules to govern the river, thereby weakening the Mekong River Commission.  In addition, criminal groups – some active in casinos and special economic zones – are using the Mekong as their major artery to traffic drugs, wildlife, and even human beings.

To confront these challenges and others, we must sustain our current partnerships, build new ones, and keep an eye on the future.  Today, I am proud to announce new initiatives to help us do just that.

One of them is the Japan-U.S. Mekong Power Partnership, or JUMP, which will develop regional electricity grids with an initial United States commitment of $29.5 million.  The partnership will build on the great work already being done by both our governments in this critical sector, and it will bolster our support for U.S. firms working on cross-border transmission line as well.

We’re also pleased to announce the United States, working with Congress, plans to provide an initial $14 million in assistance to the Mekong countries to counter transnational crime and trafficking.  This initiative will provide support for law enforcement, support victims of trafficking in persons, stop financial flows for wildlife traffickers, and help counter the expansion of methamphetamine flows and other illegal activity coming from the Golden Triangle.  We also hope that this initiative will bolster the anti-crime efforts of other key partners, including Australia.

Turning to other areas, later this year the United States will hold an Indo-Pacific conference on strengthening governance of transboundary rivers.  This gathering will bolster support for a transparent, rules-based approach to the Mekong.  This November, at the second Indo-Pacific Business Forum right here in Bangkok, the United States expects to roll out new initiatives to help Mekong nations in the infrastructure, energy, and digital sectors.  And alongside the Republic of Korea, we’re funding a new joint project to use satellite imagery more effectively to assess Mekong flood and drought patterns.  Our LMI nations will also launch a new Mekong water data-sharing platform and a new LMI public impact program as well.  And the United States supports the revitalization of ACMEC strategy.  Hats off to Thailand for restoring this effort.

Finally, looking ahead to 2020, we see Vietnam’s ASEAN chair year as an excellent chance for continuity in making further progress on our Mekong cooperation, including by making our annual ministerial more focused, strategic, and effective.  The nations of the Mekong have a friend in the United States, and they always will.  Thank you.