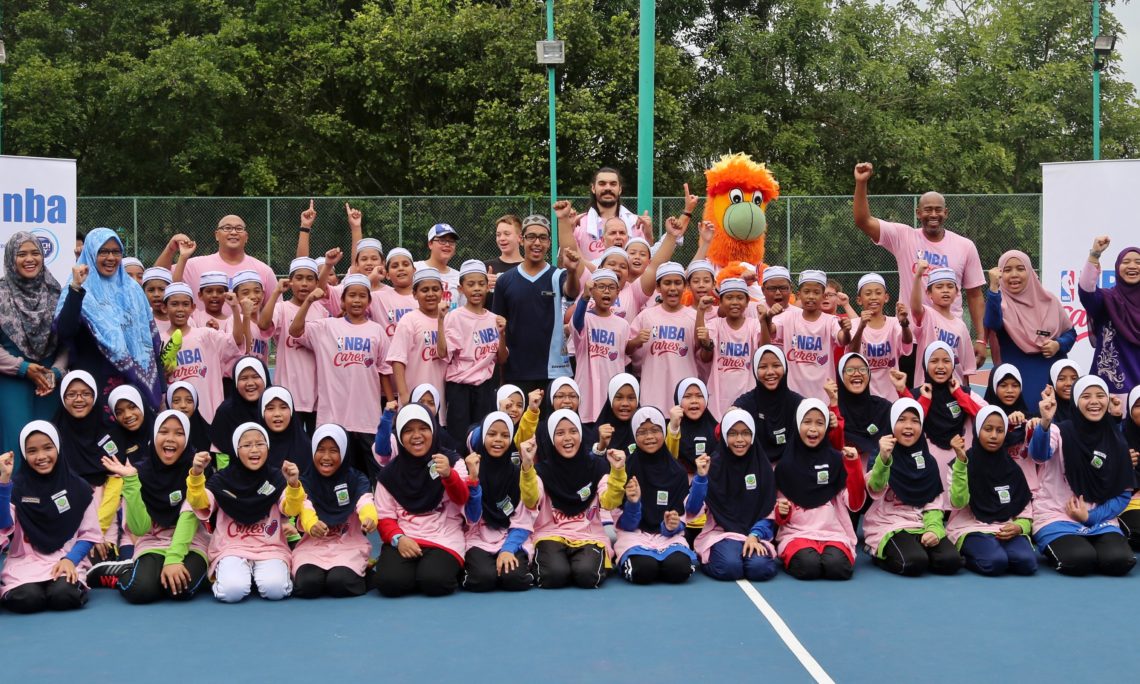 A big Hoorah from everyone at the end of the hour long clinic. (U.S. Embassy photo)

On August 4, 2016, the US Embassy of Kuala Lumpur in partnership with Jr. NBA conducted an NBA Cares Basketball Clinic for students from the Maahad Tahfiz Fatimah Az-Zahrah Islamic School. A total of 53 students between 8 – 12 years old participated in the clinic lead by Jr. NBA Head Coach, Craig Brown, alongside current NBA player, Steven Adams of Oklahoma City Thunder. The clinic which was held at the International Islamic University Malaysia was graced by U.S. Embassy Public Affairs Counselor, Mr. Frank Whitaker.

Over the course of the clinic, the students learned about the fundamentals of basketball. They participated in activities led by Coach Brown and Steven Adams to improve their ball control skills, defense, shooting and teamwork. To add to the overall excitement of the clinic, Burnie, the team mascot of the Miami Heat, made an appearance and joined the students in their drills. During the clinic, the Jr. NBA Core values of sportsmanship, teamwork, positive attitude, and respect were also instilled via the activities.

The basketball clinic is part of the NBA Cares initiative, the league’s social responsibility program that builds on NBA’s long tradition of addressing important social issue in the United States and around the world.

The basketball clinic is a direct result of the Embassy’s partnership with Jr. NBA. Through the NBA Cares initiative, Jr. NBA coaches and NBA athletes participate in programs with youth all over the world.