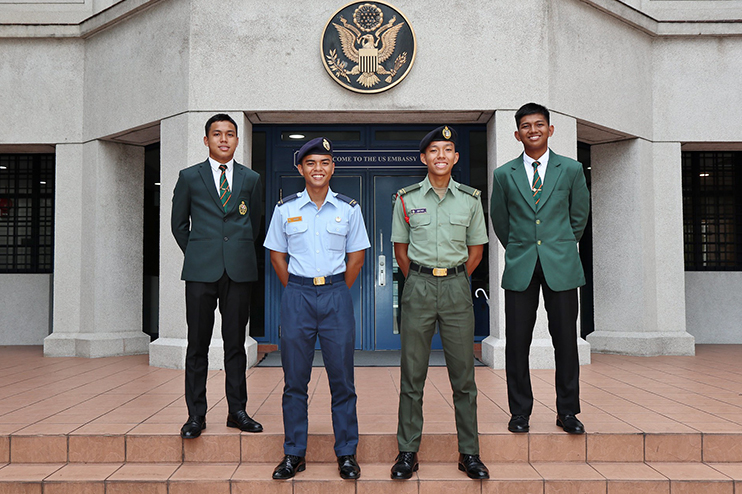 Four Malaysians have been accepted to continue their studies at prestigious U.S. service academies and prepare to become future Malaysian military officers.  The U.S. Embassy in Kuala Lumpur hosted a send-off ceremony on June 7 to mark their appointment.

Sixty-nine countries were invited to nominate candidates this year with the goal to enroll 15 candidates in each of the service academies, Michael Newbill, Chargé d’Affaires at the U.S. Embassy in Kuala Lumpur said in his remarks at the event.

“Less than 20 percent of international applicants were selected.  The selection process is very rigorous and competitive; candidates are evaluated on their academic performance, physical aptitude, character, and leadership potential. Congratulations to the cadets and their families for this incredible achievement,” Chargé d’Affaires Newbill said, adding that Malaysia currently has five cadets in U.S. Service Academies: one at the United States Military Academy, two at the United States Naval Academy and two at the United States Air Force Academy.

The following Malaysia students were chosen after a rigorous selection process that evaluated their leadership potential, physical fitness, and academic achievements:

• Qarin Loqman Safriza from Ampang, Kuala Lumpur, has also been appointed to USNA in Annapolis, Maryland.  Qarin Loqman was a student at Malay College Kuala Kangsar and Royal Military College.

• Zarif Bin Mohd Zamrin from Subang Jaya, Selangor, has been appointed to the U.S. Air Force Academy (USAFA) in Colorado.  Zarif had attended SMK SS17 before completing his Foundation in Engineering Technology at the National Defense University of Malaysia. He aspires to become an air force fighter.

Edlan Mikyad bin Ahmad Syamly, from Wangsa Maju, Kuala Lumpur, is the eldest of three siblings. He aspires to become a member of the elite parachute regiment upon being commissioned into the Malaysian Army.

He attended the Damansara Utama Cluster Secondary School where he was a troop leader within his school’s Police Cadet Core.  Edlan completed his Foundations in Engineering & Technology at the National Defense University of Malaysia with an overall CGPA of 3.48. He is the first in his family to serve in the military.  His personal mantra is “Be better”.  Edlan strongly believes that with the right style of leadership, anyone can be at their best.

Muhamad Danish Imran bin Zainudin, from Kulai, Johor, is the eldest of four siblings.  He hopes to become a naval architect upon being commissioned into the Royal Malaysian Navy.

He graduated from the Royal Military College Malaysia where he was a Sergeant Putera within his company and a chairman of his school’s English Debate Club.  He is the first in his family to serve in the military.

His personal mantra is, “Selflessness and sacrifice are integral to succeed in the mission.”

A Subang Jaya native, Zarif bin Mohd Zamrin is the second-born of four siblings. Growing up in a small city in a tight-knit family, Zarif learned the importance of good communication, patience, and camaraderie.  Being the first in his family to join the Armed Forces, he would like to become an air force fighter pilot upon being commissioned into the Royal Malaysian Air Force.

Zarif attended a small national secondary school, SMK SS17, where he held several positions of responsibility through the school’s Cadet Association and was an active athlete, especially in rugby.  Zarif completed his Foundation in Engineering Technology at the National Defence University of Malaysia with a CGPA of 3.98.  He holds on to his principle that “if you strive to achieve the impossible, you’d be amazed at how close you actually get to it. Don’t aim for the sky when there are footprints on the moon.”

Qarin Loqman bin Safriza hails from Ampang, Kuala Lumpur. He was awarded the Commandant’s Award for being the top student at the Royal Military College (RMC).  He also led his Company as a Senior Under Officer to win the Commandant’s Company Award.  He plans to study Naval Architecture and Marine Engineering at the United States Naval Academy and hopes to apply his knowledge to the Royal Malaysian Navy’s fleet as a marine engineering officer upon commission.

Qarin is a student leader, rank holder, sportsman, musician and innovator.  He speaks French and has a French Language Diploma (DELF).  Qarin also plays competitive tennis internationally and nationally.  Winning a medal in the 100 Plus International Junior Tennis Championships in Thailand sparked his interest in joining the USNA tennis team, and he hopes to play the sport during his studies.  His interest in marine technology has led him to win several awards in innovation competitions, both in and out of the country.  He is passionate about music, competing in music competitions as a clarinettist for his school’s wind orchestra.

Qarin is the first in his family to serve in the military.