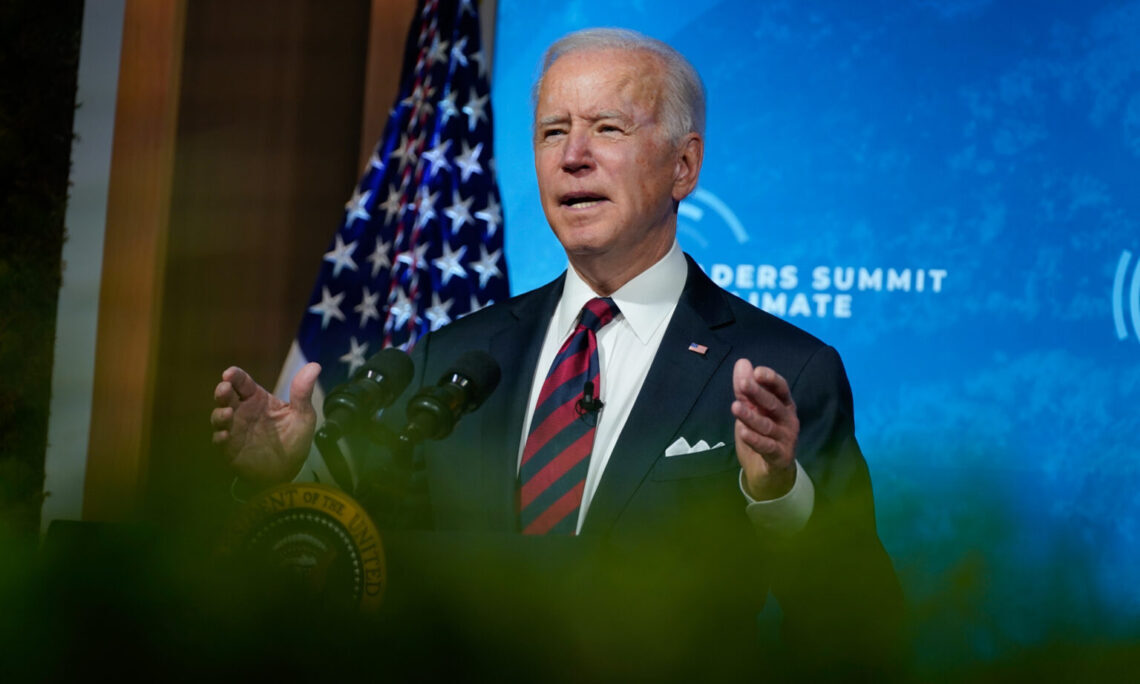 President Joe Biden speaks to the virtual Leaders Summit on Climate, from the East Room of the White House, Thursday, April 22, 2021, in Washington. (AP Photo/Evan Vucci)

On day one in office, President Joe Biden rejoined the Paris Agreement, restored U.S. leadership on the world stage, and reestablished our position to tackle the climate crisis at home and abroad. On day one at the U.N. Framework Convention on Climate Change Conference of the Parties (COP26), President Biden will outline the bold steps his Administration is taking in his whole-of-government approach to combat climate change, underscore how bold action delivers economic prosperity and peace and security, and rally countries from every corner of the world to step up their ambition and confront this existential threat during a decisive decade.

President Biden believes this is not a challenge for future generations, but one all countries must confront today – with urgent, bold, and direct action. Heading into COP26, President Biden announced  the Build Back Better Framework – the largest effort to combat climate change in American history alongside his Bipartisan Infrastructure Deal that the President is confident can pass both chambers of Congress and be signed into law. The Build Back Better Framework will cut greenhouse gas pollution by well over one gigaton in 2030, reduce clean energy costs for working families, give our kids cleaner air and water, create hundreds of thousands of good-paying, union jobs, and advance environmental justice while investing in a 21st century clean energy economy. President Biden’s bold agenda, along with his robust executive and regulatory actions to date, represents the U.S. intention to capture the economic opportunity that addressing climate change presents.

President Biden is committed to cutting greenhouse gas emissions 50-52 percent below 2005 levels in 2030, reaching a 100% carbon pollution-free power sector by 2035, and achieving a net-zero economy by no later than 2050 – all while creating good paying, union jobs at home. The President is also committed to partnering with countries most in need to strengthen the resilience of communities and economies across the world, including those vulnerable to the unavoidable impacts of climate change, reducing tensions and risks of instability.

To deliver on these goals, the President will:

Launch the President’s Emergency Plan for Adaptation and Resilience (PREPARE). This is a whole-of-government initiative that will serve as the cornerstone of the U.S. Government response to addressing the increasing impacts of the global climate crisis in order to enhance global stability. The President will work with Congress to provide $3 billion in adaptation finance annually for PREPARE by FY2024 – the largest U.S. commitment ever made to reduce climate impacts on those most vulnerable to climate change worldwide. PREPARE will activate a coordinated approach that will bring the United States’ diplomatic, development, and technical expertise to help more than half a billion people in developing countries to adapt to and manage the impacts of climate change through locally-led development by 2030. Specifically, PREPARE consists of three primary components:

Submit the First U.S. Adaptation Communication under the Paris Agreement. This document outlines U.S. priorities, policies, and initiatives to implement adaptation and resilience strategies both domestically and in vulnerable countries and communities around the world. The Adaptation Communication summarizes short- and long-term climate risks, provides examples of adaptation action, and shares lessons learned. Building on these lessons learned, the adaptation communication describes a whole-of-government approach to scaling up actions that enhance the resilience of people, communities, infrastructure, and natural resources to the impacts of climate change at home, and abroad.

Submit our 7th UNFCCC National Communication, and 3rd and 4th Biennial Reports required by the Paris Agreement. To communicate our continued progress in recent years, these reports focus on U.S. actions taken between 2016 and 2020 to combat climate change at home and support developing countries. They recognize the value of transparency in our shared, global efforts to tackle the climate crisis and highlight the critical role of our state, local, and Tribal governments, as well as private, educational, and non-profit organizations in delivering climate progress.

Release the U.S. Long-Term Strategy to meet our 2050 goal—consistent with limiting global warming to less than 1.5° C.  The Strategy shows how action in this decade can set us on track for continued, deeper greenhouse gas reductions through the 2030s and 2040s via federal, state, local, and Tribal government leadership, in coordination with all-of-society action. The U.S. 2050 net-zero goal is ambitious and achievable, and supports a more sustainable, resilient, and equitable economy, including the opportunity to create millions of high-quality jobs with the chance to join a union. Achieving our net zero goals will mean a completely carbon pollution-free society, with strong economic and public health benefits for all Americans – and the world.

And going into COP26, the President announced the Build Back Better Framework – a $555 billion investment representing the largest single investment in our clean energy economy in history, across buildings, transportation, industry, electricity, agriculture, and climate-smart practices across lands and waters. The framework will set the United States on course to meet its climate targets, achieving a 50-52% reduction in greenhouse gas emissions below 2005 levels in 2030 in a way that grows domestic industries and good, union jobs and advances environmental justice. Specifically, it will:

These historic Build Back Better investments will be complemented by the Bipartisan Infrastructure Deal, which will rebuild the arteries of our economy while accelerating clean energy and transportation, advancing environmental justice, and bolstering resilience. It will: