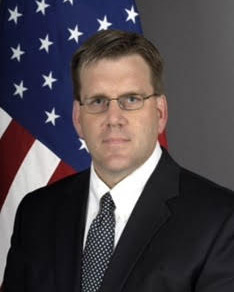 Dean Thompson is a member of the Senior Foreign Service and has more than 20 years of experience in U.S. diplomacy. Most recently, Mr. Thompson served as the Deputy Chief of Mission at the U.S. Embassy in Bucharest, Romania.  He has also served as U.S. Consul General in Kolkata, India and the Chief of the Economic and Commercial Affairs section of the U.S. Embassy in Colombo, Sri Lanka. Mr. Thompson’s other overseas service includes tours at the U.S. Embassies in Paraguay and Bangladesh. While stationed in Washington, Mr. Thompson has led several teams in direct support of the U.S. Secretary of State and served as Director of the Executive Secretariat Staff, the Deputy Director of the Department’s 24 hour Operations Center and the Director of the Department’s Crisis Management Staff. Prior to joining the Foreign Service, he worked in the Office of the Secretary of Defense on Counterproliferation issues and U.S. security assistance to the Republic of Korea. Mr. Thompson has a Masters of Public Management from the University of Maryland, School of Public Affairs and a Masters of National Security Studies from the U.S. National War College. He is married to Mrs. Jane Thompson, an early childhood specialist with expertise in the intervention and education of children with developmental delays and disabilities. They have three children.