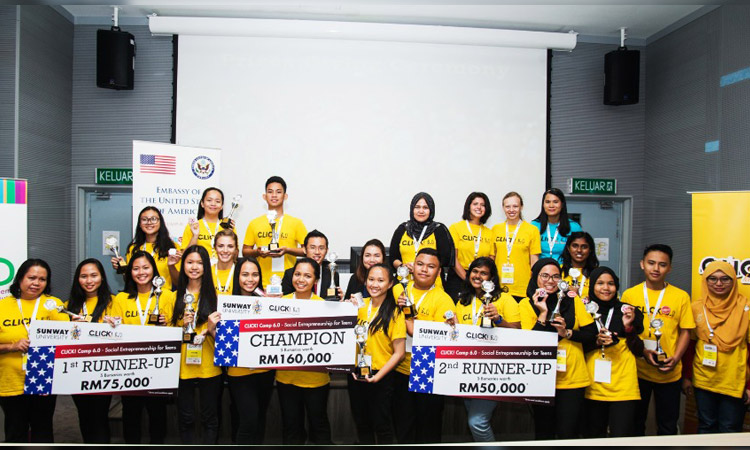 Happy faces of winning teams after receiving their prizes from a representative from Sunway University.

CLICK! 6.0 is a nationwide, months-long program that teaches secondary school students about social entrepreneurial and other soft skills. Participants hone their leadership and interpersonal skills with English as a medium of communication. Throughout the series of camps, Fulbright English Teaching Assistants (ETAs) assigned to each school, together with teacher advisors, helped students develop project ideas to solve social issues facing their respective communities. The students were given RM200 of seed funding to kick start their proposed projects and had eight weeks to work on them, documenting their efforts and posting updates on a Facebook page.

Afterwards, the team that attracted the highest number of ‘likes’ and created the biggest impact in their community got the chance to attend the Click! 6.0 Grand Finale, held at Sunway University on September 14, where the country’s best six teams were shortlisted to pitch their completed project  in front of a panel of distinguished judges. This year, the “Bulleproof Summitians” team from SMK Sungai Damit, Sabah, was chosen as champions for their project which involved installing solar lights in a remote village so students could study at night. “The Persisters” team from SMK St. Luke, Sarawak, won second place for their project to help their school reduce the number of the drop-outs by organizing an annual “Confidence Camp” during which they sold snacks and in-house movie tickets.

Team “Indurance” from SMK Inderapura, Pahang, bagged third prize for establishing a campaign against bullying called “Bye Bye Bully Malaysia”. The proceeds from selling T-shirts and souvenirs with the unique hashtag “#NoH8” were then used to expand their campaign to other schools. Winning teams walked away with prizes that include full and partial scholarships at one of the Sunway Pre-University Programs or Sunway University’s American Degree Transfer Program, sponsored by the university itself.