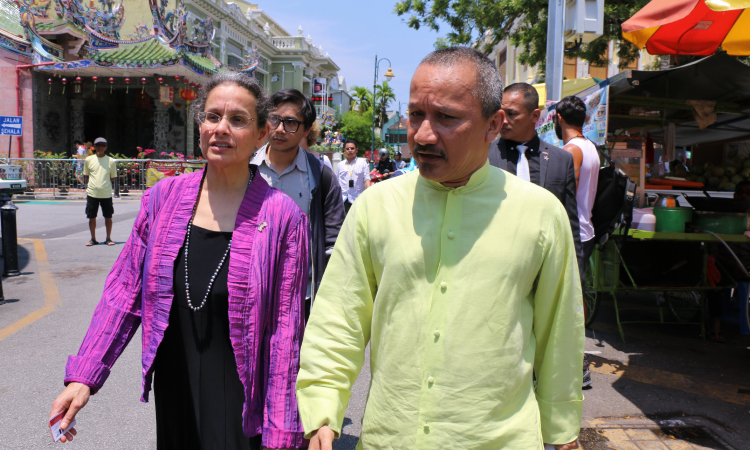 Ambassador Kamala Shirin Lakhdhir made her first official visit to Penang on March 6-8, 2017. The trip was an opportunity to engage with U.S. companies, meet with government and civil society, and also enjoy Penang’s vibrant culture. Ambassador Lakhdhir visited several U.S. companies, including Intel, which has been in Penang for 45 years and employs 8,000 staff there. She visited Mattel, which produces Hot Wheels toys in Penang, Hewlett-Packard, which has been in Malaysia since 1978, and First Solar, which manufactures cutting-edge solar technology in Kedah. In addition, the Ambassador met with members of the American Malaysian Chamber of Commerce, who represent companies such as Sandisk, Boston Scientific, and Motorola.

While in Penang, Ambassador Lakhdhir met with Penang Chief Minister Lim Guan Eng to discuss issues of mutual interest. She attended a joint drug enforcement conference that was co-hosted by the Royal Malaysia Police and the U.S. Drug Enforcement Administration. She also witnessed a joint maritime enforcement training exercise with the U.S. Army and the VAT 69 of the Royal Malaysian Police. Ambassador Lakhdhir also visited the renowned Penang Institute think tank to discuss U.S.-Malaysia relations.

In addition, Ambassador Lakhdhir visited the Penang Science Cluster during a youth science fair. The U.S. Embassy is partnering with the Penang Science Cluster on “Project Ignite”, which will inspire the next generation of entrepreneurs in Malaysia by promoting science in schools. She was also treated to a walking tour of George Town by native Joe Sidek, founder of the world-famous George Town Arts Festival. She also found time to tour the upper walkway of Komtar and enjoy the views from the Rainbow Skywalk and Observatory Deck.